The cave of El Castillo is situated in the Mountain of Monte Castillo in Cantabria.  This cave currently holds claim to the oldest dated image created by man.  A layer of calcite which has formed over an image of a red dot, in the chamber of hands and tectiforms, visible at the bottom of this page, has recently been dated by Uranium series dating to 40800  years (Pike et al 2012).  This means that the image of the dot predates the layer of natural rock desposition for which the date applies.  The Songs of the Caves project in 2013 explored the acoustic properties of two chambers, the Bison Chamber and the Chamber of Hands and Tectiforms.

Dating is an issue in arhcaeology as may be seen from some of the radiocarbon dates from this cave.  Three of the bison images which have been dated in El Castillo have different date ranges.  Bison 19 has a series of dates the earliest of which places it with 95% of accuracy between 17600-16831 years BP (GifA-98151), a slightly younger date provides a range between 16967-16058 years BP (GifA-95227).  Bison 18a dates between 16967-15975 years BP (GifA-96068) and 15425-14174 years BP (GifA-96079).  Bison 18c has a range of 12621-12096 years BP (GifA-95136) and 15134-13894 years BP (GifA-95375).  The explanations of the causes of these discrepanices are varied.  It is possible that the samples have been contaminated, but it may be likely that when the images were painted the charcoal used was from different sources and that they were already old at the time of painting.  It is also possible that these images were retouched at different stages of the use of these caves.  What we appear to be able to say for sure is that the cave was used and decorated by humans from the Aurignacian (40800 years BP) through the Gravettian, Solutrian/ Early Magdalenian and into the later Magdalenian, a period of almost 20,000 years.  By the standards of modern history this is an enormous stretch of time and, while the cultural traditions cannot be said to be continuous, this shows a continuing value placed on these special places.  All photographs by Raquel Jiménez Pasalodos. 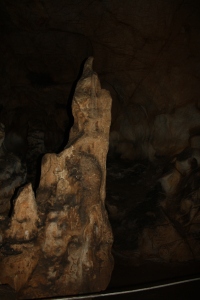 The bison chamber in El Castillo

Hand near the entrance to the bison chamber of El Castillo 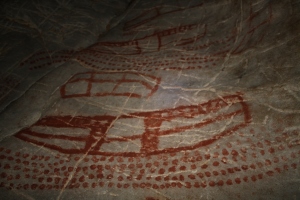 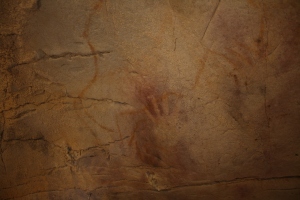 El Castillo panel of hands and tectiforms. The central hand shown here directly between the two more-prominent hands and below the back legs of this bidson has been dated by Uranium series dating to older than 37,300 yr BP. The faint red mark to the right of these three hands has been similarly dated to older than 40,800 yr BP.